One of our play group’s annual traditions is to go apple picking in September.  We go to my favorite orchards and spend the morning picking apples, playing with the farm stuff, tasting cider, feeding the goats, and welcoming Autumn.

As is evidenced by this gif, this year was fun. Thanks Hannah (from The Lighthearted Life of HMV) for being so lighthearted and fun! 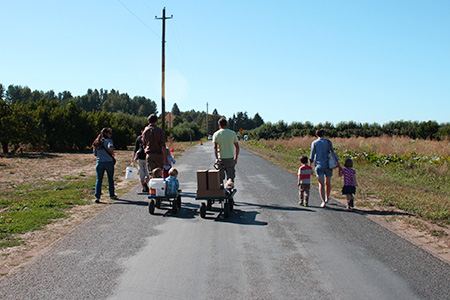 This year was also warmer than it should have been if you ask me. Last year was sort of drizzly and that was much more Autumnal.  I love this event because it assures us that Autumn is, in fact, coming.  Even when it’s 80 degrees and the day before was over 90, the apples on the trees are a promise of cooler weather, and darker skies.  And nothing beats biting into a crisp, juicy apple picked directly off a tree in a century old orchard.  I can pretend that there’s a crisp breeze blowing down the rows of trees, if only for a moment. 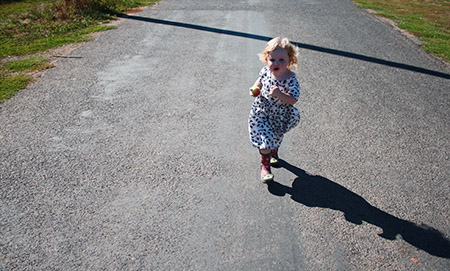 My camera was doing strange things, and it turns out that the only photos that were in focus (or mostly in focus, anyway) were of Alma, Harriet, Rory, and Poppy.  I swear that there were lots of other people there!  In fact, I think it was one of the best turn outs we’ve had at a playgroup lately – nine out of the ten families!  As I’ve said many times before, I love our little tribe of families in this group, and all our traditions.  Next month is our 4th Annual Pumpkin Patch trip, a perennial favorite! 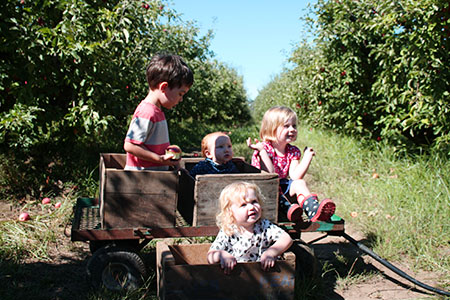 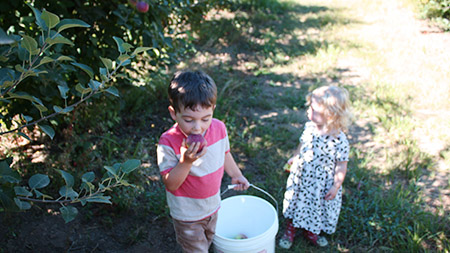 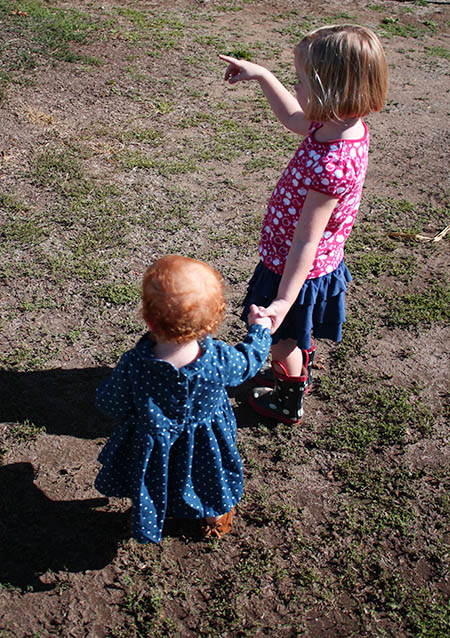 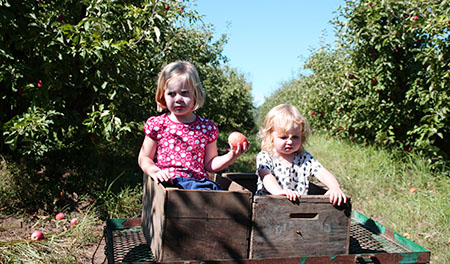 This last photo cracks me up.  “Ummm… mom, why are you putting us in boxes?”

Forgive me, children, Autumn is coming.  I can make no excuses for my silly ideas.  You will just have to get used to it. 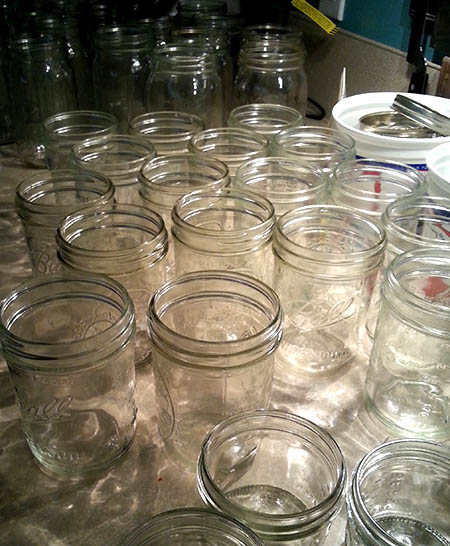 We’ve had a garden pretty much since we moved into our house.  Some years have been better than others.  The last few have been pretty lean.  Mostly because I have either been pregnant or with a little baby for the past four summers.  To me, that made it very difficult to nurture something else – like a garden.  We’ve tried lots of different things.  This year, it was pretty small, but we focused on spring greens, a substantial herb garden, a sad little flower bed, and a couple tomato plants.  In the past we’ve tried to grow enough to can, but it never seems to all be ready at once.  This year, I just went out to a farm and bought enough produce to spend a week canning all the things.

I bought a case of peaches, a case and a half of tomatoes, a huge bag of cucumbers, a bouquet of dill, and some amazing sweet onions.  With this bounty, I was able to make (and can) a ton of stuff that will hopefully get us through some of the darker months.

After a week of cooking, canning, burning myself, washing, sanitizing, cleaning, sweating, I have 35 jars of summer food to eat in the winter months. 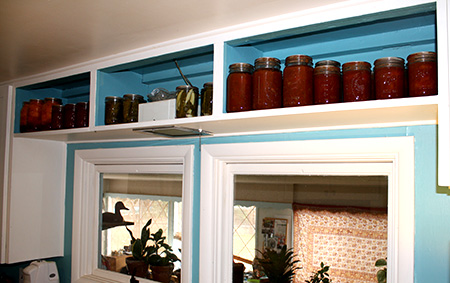 I know that it’s easy (and cheap) enough to just buy good tasting and good for us food at the grocery store.  Especially the way we are able to shop at our local market.  It might even be cheaper (and it’s certainly easier) than doing all the cooking and canning myself, but that’s not the point.  The point, to me, is that I know exactly what’s in our food.  I know exactly who made it, and when, and where.  It’s something I can do to provide healthy and tasty food for my family. 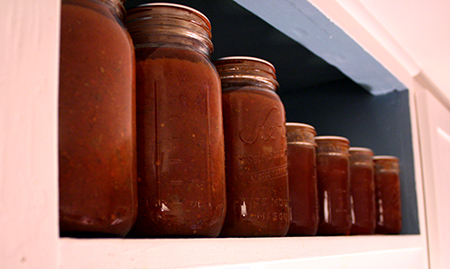 That was the first thing I did.  Unfortunately, I started too late in the day and lost steam when I got to the chutney stage.  It was late at night and I wasn’t thinking.  I ended up skipping the chutney and throwing the remaining sauce away.  The chutney was probably a good idea – I’m not sure we’d have eaten much chutney.  But the throwing out the remaining sauce?  As I was pouring it out it occurred to me that I should not be doing it.  Even if I was too tired to can anymore, I could have at least frozen it.  Or saved some to eat right away.  Ugh.  Live and learn.

Next up was the tomato sauce also from AVM.  I’m not sure I let this cook down enough before I canned it (hey, canning expert readers, is that okay?), there seems to be some water in the jars (you can see this in the above photo).  I suppose I can just cook down the sauce more when I’m using it if it’s too runny.  I also had three jars that didn’t seal, so I just stuck those in our freezer.  Oh, I also gave a quart to my friend Jane who came over to help entertain the kids during the canning process – thanks Jane! 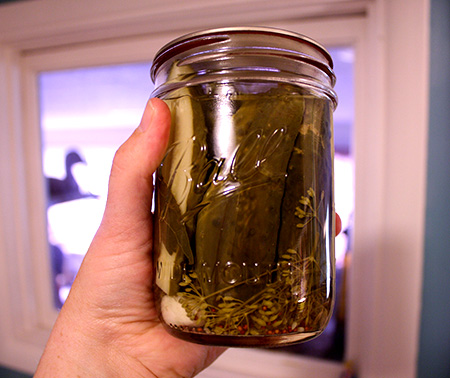 I found my great uncle Chet’s amazing pickle recipe at my mom’s house earlier this summer, so I had to make those.  As with many old family recipes, some of the directions were unclear, so I did my best to figure it out.  The biggest thing that didn’t make sense was his recipe called for canning in quart jars, but the canning book I have said that canning pickles in quart jars leads to soggy pickles, so I did it in pints.  Does anyone out there have an opinion on this?  Should I try quart jars next year?

I decided to just straight up can the rest of the peaches.  I already used one jar (because it didn’t seal) to make a cobbler.  I know that in the dead of winter, that will taste amazing.  I can already imagine it on one of those dark, dreary, foggy nights when it feels like the whole world is void of color – popping one of those jars of summer open and making a sweet, bright dessert. 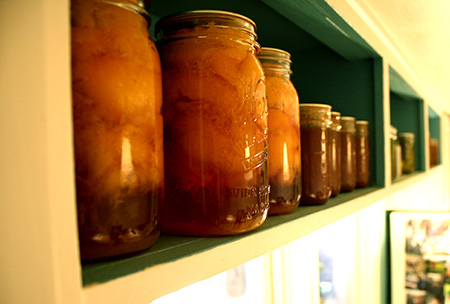 So, I learned a lot about canning all the things, and I have some ideas of what I’ll do differently next year, but I’m going to hold off on final judgements until we’ve eaten all the fruits of my labor (hahaha… food pun!).

In closing, on the night of the wasted sauce, I didn’t get to bed until after midnight.  The next morning Harriet woke up bright and early, and I turned to her and said, “Harriet, you need to be quiet.  Mommy was up late preserving the bounty of the season for us to enjoy in the winter.”  Jesse cracked up.  It’s become one of those jokes.

What have you canned this summer?  What are some of your favorite canning recipes?  Do you like canning all the things?  Do you have any other ways you like to preserve the bounty of the season?