My mom’s birthday was yesterday, and I’d say we did a good job celebrating.

But I have to back up a little bit.  Actually, about 30 years… When my parents moved back to Eugene in the 80s, the Oregon football team wasn’t very good.  My dad bought four season tickets anyway.  He got pretty much the best seats… Right on the 50 yard line, 18 rows up.  They are seriously perfect.  Right in the middle.  Far enough up that you can see the whole field, but close enough that you feel like you’re in the action.  My dad has been a fan through it all – losing seasons, winning seasons, national championships.

That brings us to about a month ago.  My dad called me to tell me he was flying my brother out from Virginia for a football game – actually, for a last football game in his seats.  He’s decided that this is the last year he’s buying season tickets.  Dad asked if Jesse and I wanted to go along, and that Deena (my step-mom) would watch the girls and put them to bed.

Dad also suggested that since it was mom’s birthday weekend, we should have a breakfast and surprise her with Dan.  I texted Dan and told him not to tell mom he was coming.  I texted Steve (my step-dad) and told him the plan so he wouldn’t make other plans.  I didn’t tell Alma because I knew she’s spill the beans.

On Saturday, I got to go to a football game with these three handsome guys. 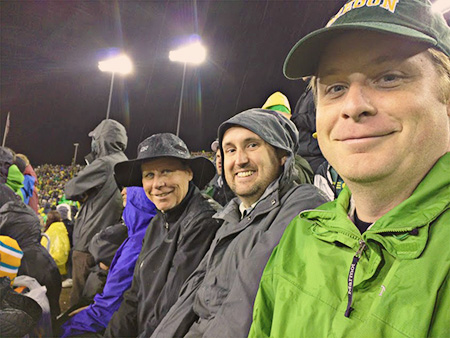 I know that football games aren’t usually emotionally charged, but I have to admit that I felt pretty darn happy to be sitting in those seats with my three favorite men.  Knowing that it would be the last time in these seats was also a little strange – I have so many memories tied to the Ducks and those seats and that view.  Also, ever since Peace Corps, I get pretty choked up when I hear the national anthem (that’s another story for another blog post…).

It was a rainy game, but we didn’t get too soaked.  Besides, as many of you know, it never rains in Autzen Stadium.  We had an unfortunate event that culminated with the women leaving a puddle of vomit in the row in front of us, but on the bright side, that opened up our view so it was even better than normal, even if it didn’t smell as good as normal. 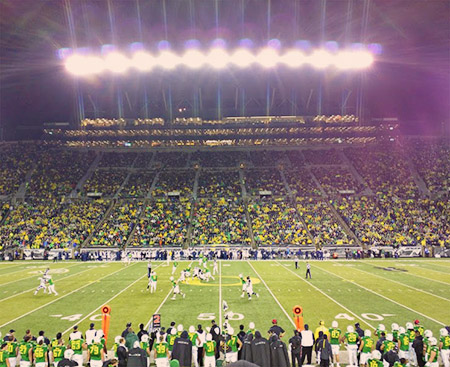 The game was great, it was close, but the Ducks won.  It was a fond farewell to the seats that hold so many memories.

Then, yesterday morning, Dan came about a half hour before mom and Steve were expected.  Dan and I were waiting in the kitchen when they showed up.  Jesse did a great job getting Alma to talk about something other than the fact that Dan was in the kitchen.  She still didn’t know that it was surprising to have Dan there, otherwise she would have said something like, “There’s a surprise in the kitchen!  It’s Uncle Dan!”  Here’s how it all went down (nothing really happens until about 30 seconds in) :

Mom was certainly surprised, and we spent the rest of the morning together.  We had breakfast, played around the house, then went out to lunch. 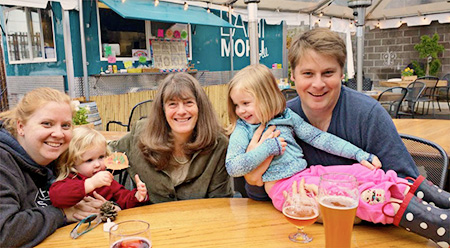 When Dan moved away over a year ago, I truly thought we wouldn’t get the chance to see him again until his wife’s graduate program was done.  We’ve been lucky to have seen him twice now (thanks to my dad!), once in California, and again this weekend.

My girls love him, and he’s really fun with them.  He’s definitely that uncle who tries to teach them the wrong things, and I love him for it.