It happened again and again.  I would look our my parent’s window and see them coming up the driveway.  There were always two of them, always in blue suits like the people from Mathnet.  We knew they were coming for us.

We would try to hide.  In my parent’s closet.  Under my brother’s bed.  We would be almost hidden when we would sense that they were in the room with us.  I would always have something – a foot, an elbow – sticking out.

They would grab me.

Then I would wake up.

I had this dream over and over when I was little.  Always the same, but just a little different.  Sometimes it was two men, sometimes two women, sometimes one of each.  We would always hide somewhere different, but I would always be grabbed.  Then I would wake up.   I even had the dream once during college.

I’m pretty sure this dream is what has led to me having an irrational fear of kidnapping.  I’ve always been scared of it.  Once, while walking to school, my friend and I convinced ourselves that a car pulled over and offered us a flower to get in their car.  Another time, I was on the school bus with a few other kids and the driver forgot we were there and started driving back to the bus barn.  We were convinced we were being kidnapped.

When I had Alma I panicked because I realized that I didn’t have to just worry about myself being kidnapped anymore.  Now I have to worry about my girls getting kidnapped, too.  I don’t know how to present this idea to the kids.  I want them to stay with me in crowded places, know not to get into cars with strangers, not wander around the neighborhood.  But I also don’t want to instill my irrational fear in them.

All this because of this dream.

I should add that once, I didn’t wake up when the blue suits grabbed me.  The dream kept going.  I ended up on a cruise ship with a friend from preschool who had the same ice cream sundae tank top as me, eating the ice cream sundaes from our shirts.  This should have convinced me that getting kidnapped can be fun.  Or something. 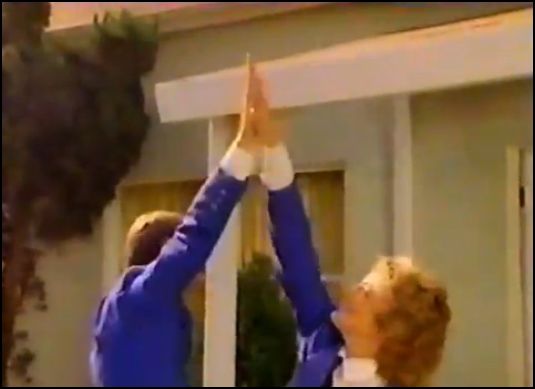