I know, I know, I’m totally jumping the gun on the whole Autumn 2015 header on my blog.  (If you’re reading this on a reader, you will have to actually go to the blog to see the new design.)

All during August, I was following my friend Megan Lenhardt (more like acquaintance, but let’s just say friend) as she committed to doing a vlog a day and calling it Vlaugust.  There were some vlogs that I just skimmed (can you say that when it’s a video?  what’s the correct term for that?), and some that I watched in its entirety.

I learned a few things about the internet by watching Megan.  The first is follow-through.  She did it, she posted 31 videos.  Another thing was that it’s okay to ask for help – there were a couple vlogs where her husband jumped in and took the lead.  Another thing I learned was that content doesn’t matter as much as actually getting it out there.  I hope this doesn’t offend her, but there were some vlogs that just didn’t capture my interest.

That’s okay.  Not everything she posts will be perfect for her viewers.  But she did it, she put it out there.  Maybe she knew that some of the videos weren’t going to have many views.  Maybe it took her the whole month of posting her vlogs to build up the courage to post the last video.

She ended the month with the most amazing video of all – her first music video on YouTube.   I am not going to lie, I’ve been listening to it on repeat all day, and the whole time I’ve been writing this post.  It’s one of those songs that just gets into me, stirs something, and makes me want to create and grow and think and share.   I think it’s a sign of artistic genius when something inspires someone to create their own kind of art in response.  In this case, the genius obviously goes to Sara Bareilles who wrote the song, but also to Megan who sings it beautifully and truthfully.

So, back to me.  Short story long and all that.

After watching Megan’s vlogs and thinking about their impact on me, and listening to “Manhattan” over and over and over again, I was inspired to redesign my blog and get back into it.  The song is beautiful and melancholy.  So is Autumn.  Beauty and melancholy always make me want to create, which is probably why Autumn is my favorite and so inspiring to me.

I also thought about what this blog is for, and why I do it.  I put most of those thoughts in my newly written About Me section, so please go read that if you’d like to. 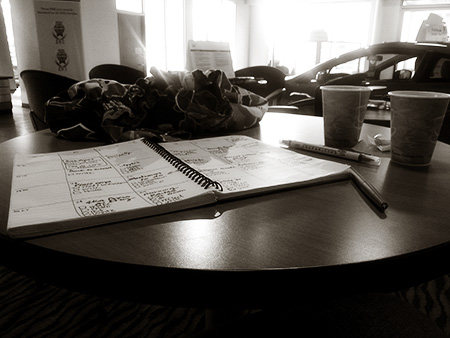 I had a couple hours to myself today while my car was having some work done, and I actually planned out a whole month of blog posts that I’m really excited about.  So, here I am, inspired once again.  Ready to create and share!

Another random thought to add to the end of this already jumbled, unorganized blog post:  Today as I was walking to my car, I felt the crisp chill of Autumn sunlight on my face and it was magic.  My favorite time is coming and I’ve never been more ready.  I know that seasons are generic nouns and don’t need to be capitalized, but let me just say that Autumn deserves to have a capital A.