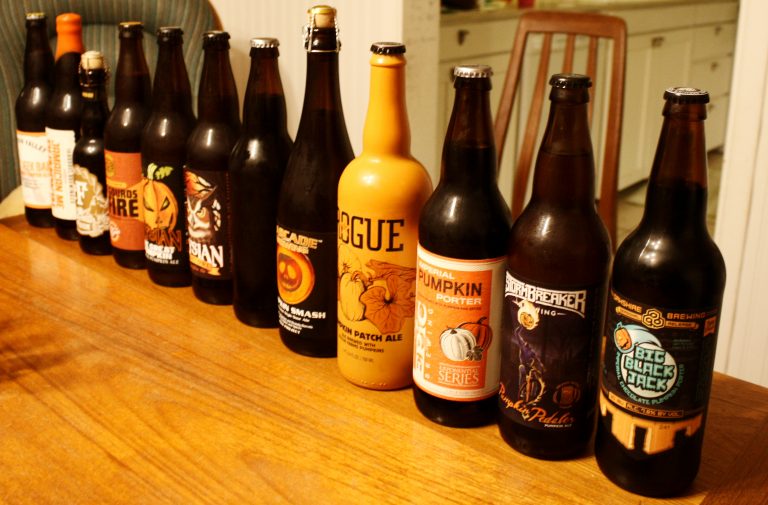 This was another fun Pumpkin Beer Fest, for sure.  This year (like the first two years: 2016 and 2015), was a night of fun, friends, snacks, laughter, and of course, beer.  Everyone brought a couple (or several) bottles for everyone to try out.  Like last year, some of our friends couldn’t make it, and we missed them, but the show must go on.  Also, I was excited to have my college roommate with us this year!

We used our traditional scoring rubric.

There are always discussions about how to rate a beer when it’s good, but not too pumpkin-y.  We usually leave that up to the rater to decide, personally.  Without further ado…. here are our results.  Cheers!

1st Place:  Night Owl, Elysian Brewing Company 4.07.  Once again, Elysian seems to have the right formula for a delicious pumpkin beer.  This one had just the right blend of pumpkin spice.  It wasn’t syrupy or too spicy or bitter.  Smooth, perfectly spiced, and wonderful.

2nd Place (tie): Great Gourds of Fire, Hopworks Urban Brewing 3.93. This one had a bit of a kick at the end.  It is brewed with the typical pumpkin spices, but also with some actual spice.  I didn’t really like that about this one, but the pumpkin spice was lovely, and it was a good, solid beer.  It was also our first, so perhaps that’s why it scores so well.  We’ll never know.

2nd Place (tie): Evan’s friend Evyn’s homebrew 3.93. This was perfectly smooth and easy to drink.  It had some good pumpkinness in it and it was delicious.  Good pumpkin beer, Evyn.

3rd Place: Pumpkin Pedaler, Stormbreaker Brewing 3.86.  I don’t remember this one.  I didn’t even remember to put this on the blog originally.  I’ve edited the post to add it, but I can’t say anything about it.  But it scored pretty well, so it must be good!

4th Place: The Great Pumpkin, Elysian Brewing Company 3.79. This was 2015’s winner, and still one of my favorites.  This one tastes like pumpkin pie, but in a really good way.  I still love this one.

5th Place: Pumpkin Bier, pFriem 3.71.  This was last year’s winner and it was delicious this year, too.  I think I scored it lower because I didn’t get the pumpkin spice out of this one like I wanted to.  It was a delicious, easy to drink beer, but, to me, it just tasted like a delicious beer.  I wanted more pumpkin.  Looking back at last year, I wrote that it had a gingery finish.  I didn’t get that this year.

6th Place: Imperial Pumpkin Porter, Epic Brewing 3.79. I don’t really like porters, or really pumpkin in porters.  I think I like my pumpkin in lighter beers so the spices dance around, instead of just sitting there in the darkness.  This was my favorite of the dark pumpkin beers, though.

8th Place: Pumpkin Patch Ale, Rogue 3.07.  I actually really liked this one.  It was good.  Jesse thought it tasted too much like actual pumpkins – he compared it to pumpkins rotting in a field.  I didn’t really taste that, but you know, to each their own.

9th Place: Jamaican Me Pumpkin, 10Barrel 2.29.  Besides having a really dumb name and being ridiculously hard to open, this beer just wasn’t much good.  It was syrupy and too sweet.

11th Place: Pinchy Jeek Barl, Anderson Valley 1.43.  This one was bad.  It is aged in bourbon barrels and it just tasted like gross bourbon.  Pumpkin beer or bourbon- pick one, ya know?

That’s all!  There you have it!  Our scientific, fool-proof list of which pumpkin beers to drink this year.

Also, I think it’s interesting that we were all in a more middle of the road mood this year.  We usually have a much larger spread of ratings.  It would be interesting to look back and see what was going on in the world when we did these ratings.  Last year, everything was all about the campaign and so divided and everyone had strong opinions on everything.  The first year (when we were all more innocent – in many ways), there were five beers that scored over 4 points – we were more hopeful and happy and generous.  This year we’re just jaded and not willing to commit to things being good OR bad.  Or something.  I’m obviously not a sociologist or a beer expert, so don’t take my word for any of this. 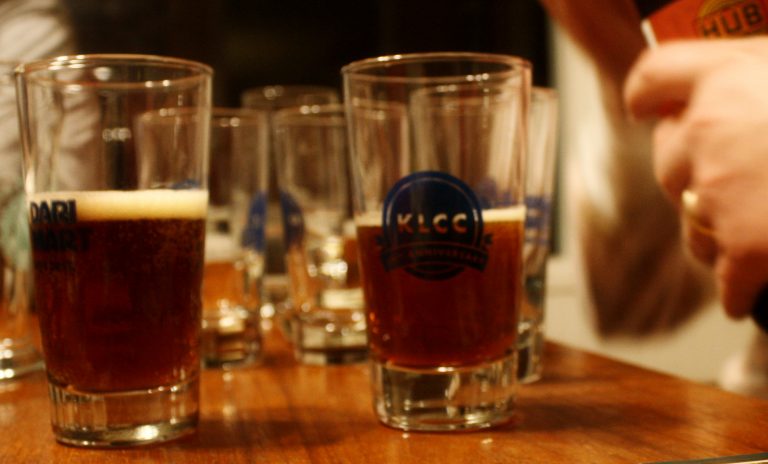