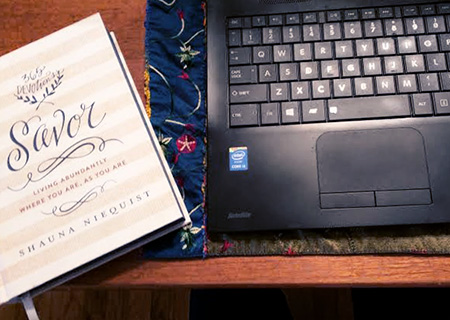 I’ve been trying to create a new morning routine for a few months now.  My intent is to give myself some quiet time in the morning, before everyone else is awake, to get focused and settled. I couldn’t do this earlier because Harriet was waking up so early, but luckily she’s been sleeping in a little bit more and now I have time in the morning.

One thing I bought to help me do this is the book Savor. It’s a book of devotionals that was recommended by Ali Edwards. I bought it, but I couldn’t really get into it, so I suggested to my best friend, Katrina, that she get a copy too.

We’ve been trying to keep up and messaging back and forth about the readings everyday, that’s been harder than I thought it would be. I know that I need some time, set aside, just for this devotional.

One thing I realized about my friendship with Katrina, while I do consider her my best friend, we don’t have much time anymore to really talk and delve into deeper issues. I’ve already noticed that this book has helped us become closer and I’m looking forward to having more time to focus on it and to focus on our friendship.

So, when I had the idea to start getting up earlier, and create a morning routine I was thinking that I would get up at 5:50. I started setting my alarm and every morning I would just turn it off. My new idea is to wake up at 6:30, which is only 15 minutes earlier than Jesse gets up. I think this 15 minutes will be enough time to start making some tea or coffee then read the daily devotional in Savor, and to send my response to Katrina.

Today was the first day I’ve done this, and it seems to work out pretty well. I’m going to check in on my blog later this month to let you know how long I’ve been doing with this, and hopefully I’ll have all sorts of successes to share. I might even have expanded it to more time so I have time to do some sewing or creating along with the Savor.

Here’s a great line from yesterday’s entry in Savor.  Doesn’t get much better than that!

Right now all the leaves are falling, and there’s no reason that they have to turn electric bright red before they fall, but they do and I want to live like that.