This has taken me so long.  I think I bought the fabric last summer when we moved Harriet into a big bed.  Then I started sewing in October.  Then I finished the quilt top in the winter.  Then I quilted it in the spring.  I finally got about to binding this past weekend and Harriet was so happy and excited.  I am too. I used the same pattern as I did with Alma’s big quilt.  But, again I had to modify it.  I wanted to try the color gradation, but that was only designed for queen sized quilts.  I had to put on my thinking hat, do some math, and hope for the best.  It actually worked out just right and I really love the finished effect. I used the same color scheme as I did with Alma’s quilt, but it is mostly different fabrics.  I love these scrappy quilts because it’s fun to use fabrics with sentimental value and find cute little quirky fabrics – I like the idea of the quilts being like eye-spy books with hidden things.  Harriet’s favorites are the pink mermaid tails scattered throughout the quilt. Here’s a photo of the front of the quilt: And the back.  I love making quilt backs more interesting than just a big expanse of fabric: I’m basically a self-taught sewist.  My first few quilts were just thrown together squares and strips and triangles.  I have used tutorials and videos and my own intuition.  I took a class to make Harriet’s “Hoo-Hoo Coat” (it has owls and is still her favorite), and really learned a lot.  Having actual instruction was really helpful and beneficial to my sewing.

When I made Alma’s big twin quilt, I bought a pattern, and mostly followed it.  I had to change it a bit to make the colors flow the way I wanted.

I’ve been working on a new quilt, a Tula 100 block sampler.  Actually, I worked on it a lot a while ago, and it’s been sitting around all winter.  I bought Tula Pink’s City Sampler book after seeing some amazing blocks on Instagram. I’ve learned that triangles look cool, but are a pain in the butt. I love these squares because they are so little.  The finished size will be 6×6, so all the little pieces are tiny.  I’ve been able to use many of the fabrics I’ve had leftover from other projects, and haven’t had to buy much.  I’ve bought a few fat quarters of plain colored fabrics because I’ve realized that my tastes tend to be a bit busy and having some solids help balance that little bit. I love going through the blocks I’ve made.  I’ve made 62 so far, so I’ve over halfway there.  Working on my Tula 100 quilt is on my Winter To Do List, and I’m really excited to get back into it. I’m not sure what the finished product will be, but I’m leaning towards using it on our bed.  It will be bright and cheerful, and I love that sort of thing. 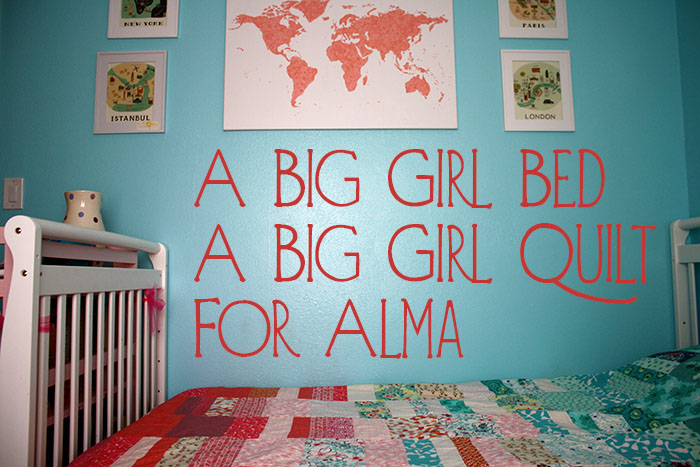 Alma just made the transition from her ‘baby bed’ to her ‘big kid bed.’  We actually converted her crib into a twin bed and just had to buy a mattress.  Jesse did a great job building the rails and platform for the bed.  I love having such a handy husband!

I wanted this quilt to be special, so I actually bought, and (mostly) followed a pattern.  All my other quilts have just been of my design and pretty simple.  And quite small.  This quilt is a whole twin sized quilt.  Whoa. 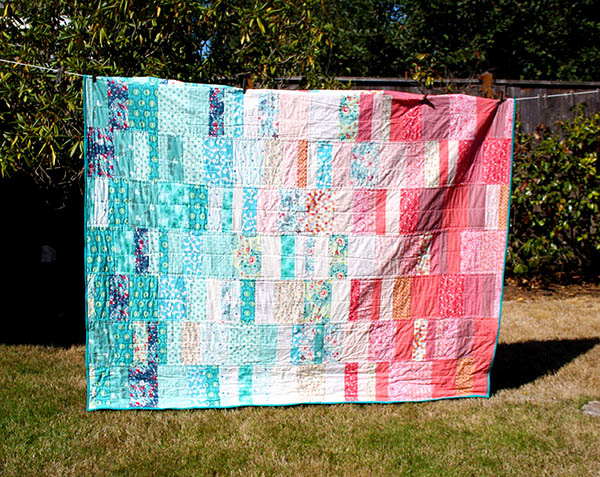 I bought the Atkinson Designs Morning Noon & Night pattern and used the Scrappy Quilt pattern with more of the Sunrise Quilt color design.  I wanted to transition from the aqua color to the coral-pink color.  I bought the pattern and most of my fabric at my favorite fabric store, Piece by Piece.

As always, I had times where I would get nervous, but it all came together really beautifully, and quite easily. 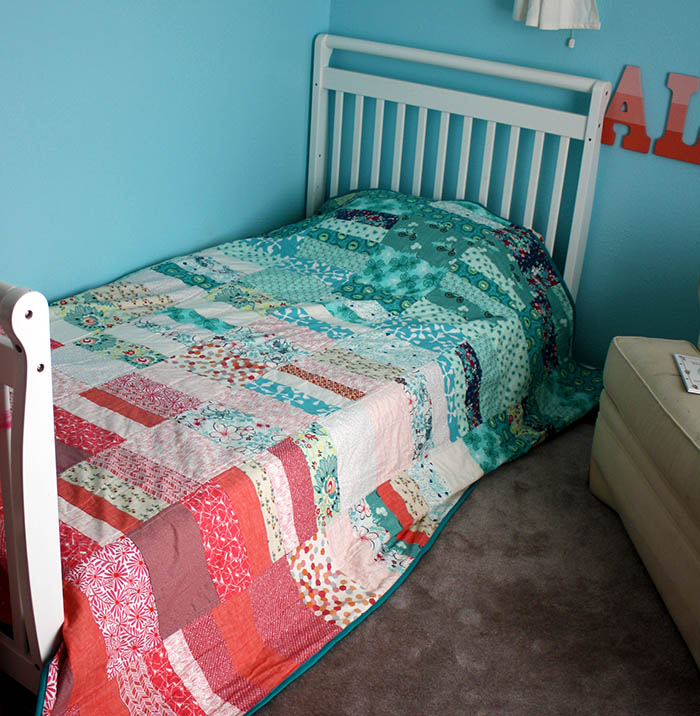 I love to make the backs of my quilts fun and interesting, too.  All these fabrics are fun to look at – fairies, goose rides, hiding kids.  I love it. 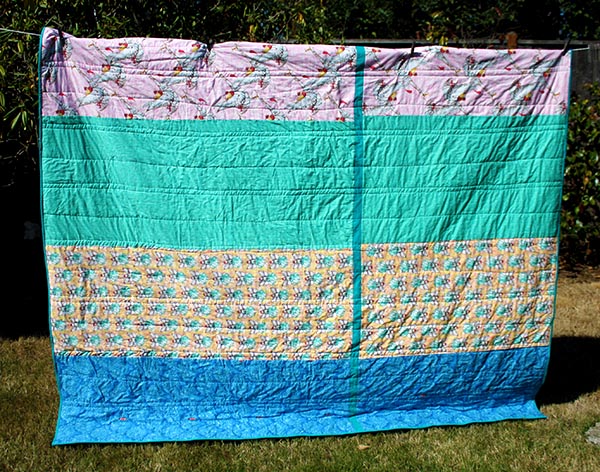 This is by far my biggest sewing project, and totally one of my favorites!

Right now I’m working on making a quilt for Alma’s new twin sized bed (!).  She’s still choosing to sleep in her ‘baby bed,’ and we’re not pushing the issue.  Since we got mini cribs for our kids, I was worried that they would outgrow them quickly.  Alma totally fills up her crib, and so I thought she might be uncomfortable.  Apparently she is not, since she keeps choosing to sleep in it.

Anyhow, I’m making her a full twin sized quilt.  I’ve never made a quilt using any sort of sizing guide.  I usually just make a quilt using triangles, squares, strips, or some other shape and sew them together until it’s about the ‘right’ size for a baby quilt.  This time I’m using a real pattern.

I’m using the same blues and pinks and corals that are in Alma’s room and doing a sort of transitional ombre.

Since I’ve been working on the quilt so much, I haven’t had much time to create much else.  Also, I’m trying to get back into the swing of things now that I’m totally not working at all anymore for a few months.  Yay summer vacation!

Here’s a sneak peek of some of the fabrics that are going into the quilt: 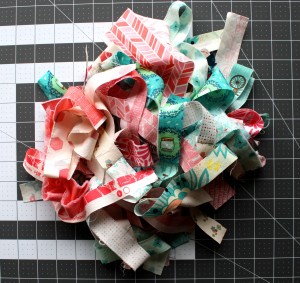 Alma and Harriet are getting a new cousin very, very soon, so that meant it was time for a new quilt!  I love this one.  It is so cheerful.  I’m also really happy with it because it uses only fabrics that I already owned.  That means that there are already memories, love, and other babies connected to this quilt.  I can see pieces from sheets I made for my friend’s baby, parts of quilts for two of my nephews, Alma’s Halloween costume/apron, Alma’s and Harriet’s weekly photo projects, Harriet’s baby quilt.  You see, lots of love.

Our new family member is being born far away in Minnesota, to my step-brother and his wife.  They chose to wait until birth to find out if the baby is a boy or a girl.  We did this with Alma, and really loved the experience.  I think this quilt will be perfect no matter who they have.

The quilting got a little wonky, but hey.  Whatever.  Gives it that homemade-with-love character.  You can’t buy that in a store!

We are all so excited to meet you, little baby. You are already so, so loved.  Even though I know it will be quite a while before I get to meet you, I’m glad your parents will be able to wrap you up in this quilt that I made for you, with love. If you are thinking about starting a project, perhaps your first one, here’s a piece of advice.  You won’t be able to screw it up as much as you think you will.  Before my first project, I was terrified that if I mess it up, it would be utterly ruined and a waste of money and time.  I quickly learned that, yes, I would screw up.  Again and again, but it is actually very easy to fix mistakes when sewing.  Just tear about the seams, and start again.

Before I was pregnant with Alma, I had never really sewn anything.  As a child, I played around and made a few little thingies, then in home-ec in middle school I made and awesome lip shaped pillow.  Other than that, I had never used a sewing machine.

The summer before I had Alma, the nesting kicked in and I wanted to make her a quilt.  I didn’t really know how to start, but I wanted to do something easy.  I came up with the idea of doing a gradient rainbow quilt, so I went to the fabric store and bought 16 pieces of fabric in a rainbow of colors.

Then I did some math and figured out how big I wanted the quilt to be.  I wanted the sizes of each strip to vary, so I just cut out 1, 2, and 3 inch pieces of each color.  Once I had all the pieces cut out, I lined them up on my floor and arranged it so the colors would overlap horizontally through the quilt.

I then sewed 12 vertical strips with one piece of each color in each strip. This seemed pretty easy, because the pieces were only 4 inches wide, leaving not a lot of room to mess up.

Then I got scared.  I had to attach each strip to the next, which meant I would be sewing two long strips together using a continuous stitch.  This felt like a lot of ways I could mess up.  As a beginning sew-er I felt like something would go wrong for sure and everything would be ruined.  I didn’t think I’d be able to sew a straight line for such a long distance.  I probably left the strips sitting for a couple weeks before I built up the courage to attempt my long lines.

I finally got brave and sewed two strips together.  It was quick, and easy!  I was amazed!  I kept going, and soon I had a complete quilt top, and I was really happy!

Then came the next scary part – the actual quilting.  I got my backing, my batting and my quilt, sandwiched it all together and found some good tutorials online.  I thought I would do a straight line down the middle of each strip, but quickly found that a wavy line would be much easier, and actually kind of cute.  I did 12 wavy lines and all of a sudden, I had a quilt!

Then the scary task of adding a binding!  I found this wonderful tutorial and basically did what it said.  The only thing I did differently was machine sewing it on, instead of hand binding the front.  Since it was for a baby, I knew it would be washed a lot, so I wanted it to be really secure.

Holy cow, I had just made a quilt!  I was basically a super hero in my mind.  I had come up with an idea, done math, sewn a bunch (192!) of pieces of fabric together, and – poof! – heirloom!

I basically took it (and still take all my sewing projects) one step at a time.  I gave myself permission to make mistakes.  I took breaks, short and long, along the way.

What are some projects you’ve been wanting to try, but have been too scared to take the first step?