Jesse and I, along with some friends, have embarked upon a Whole30 journey.  I’ve been interested in Whole30 for a while, and when Elise did it, I decided to finally give it a try.  I mentioned it to Jesse, fully expecting him to poo poo the idea, but he was on board.  We planned to do it for September for a few reasons, mostly because we wouldn’t be missing any of the fun food holidays, and it’s a perfect time with the feeling of fresh starts that accompany Autumn.

The first few days were rough, I’m not going to lie.  I had headaches, and basically felt incredibly hungover.  I was grumpy and mean and unhappy.  It was crazy to me that going without certain foods was making me feel so bad.  It wasn’t that I missed the foods – it was that my body seemed to be rebelling against the new diet.  How had I become so addicted to such crap?  It really felt like I was going through withdrawals (though, I must admit that I don’t really know what that feels like…).

By the third or fourth day, I was feeling much better.  I was letting myself eat whenever I felt hungry, trying to keep the temptations to a minimum.  I figured that if I was never super hungry, I would never crave the things I couldn’t have.

We have been cooking lots of great recipes, and I don’t have any complaints about what we’re eating.  I don’t even miss the things that are forbidden.  Sure, sometimes I think that some chèvre or blue cheese would taste good, but everything is good and tasty enough without it.

I thought I would miss bread, but it’s the last thing I miss.  I realized that the bread isn’t what makes a sandwich taste good.  I’ve been eating tuna on salad and it’s just as good as on bread.  No, it’s better.  Last night we had people over for dinner and served bread with this amazing shepherd’s pie recipe.  I looked around the table and realized I wasn’t jealous of the people eating bread.  It just isn’t necessary.

One of the very best things I’ve learned is how to make my own mayonnaise.  It’s seriously so amazingly good, I’ll never go back.  It’s especially good knowing that the egg used to make it is under a day old.  I usually go out, grab an egg directly from the coop and make the mayo that way.  It has to be room temperature, so it’s perfect, and oh so fresh!

For the first week, I was snacking more, trying to keep the hangry away.  I would eat fruit, almond butter, and Lara bars almost every day.  Now, into my third week, I’ve noticed that I don’t need to snack as much.  If I need something, I grab an apple – another great reason to do Whole30 in September.

As of right now, I’m planning on starting to add back foods on October 1st.  I’m going to start with pumpkin beer.  Beyond that, I think I’ll wait until October 8th to add anything else back in (that’s when most of our friends will be done with their 30 days).  I’ll start with cheeses and see how I feel.  Then probably peas and other legumes.  Those are the only things I really feel like I miss, so I might just stop there for another 30 days or so.

If you’re thinking of trying Whole30 for yourself, I say go for it.  Give it at least a week before you even start to decide if you’ll continue.  The first days are hard, but worth it.

Having risen from the first week fog, Jesse put together some tips for our group that I’m going to share here, too:

I’ve been thinking of what I would do differently if we did this again…so I thought I’d share!

First off make/buy your sauces before you start, including:
-Mayo
-Ketchup/bbq sauce substitute
-Salad dressing
-Ranch

Make a plan for lunches when you won’t have leftovers. I often went out to eat when I didn’t bring something from home and this has been very difficult to find somewhere that has diet-approved stuff. Probably having a steady supply of salad stuff and protein on hand is a good place to start.

Figure out a good snack food. For us it’s mixed nuts (and I throw in raisins for dessert). Also have a decent supply of Lara bars for the emergencies (they’re expensive and pretty processed, but when it’s that or hangriness…)

Screw sticking to the “Whole30” only stuff! I’m eating fruit dammit! And I’m having a glass of apple juice when I want one! Even with a few raisins now and then, it’s still better than a bowl of ice cream.

To save you some time, I’ve looked at all the labels for some things and found these to be good:
-Sweet Creek Dill Pickles (Literally almost the only brand out of dozens)
-Applewood hot dogs (not that hot dogs should be considered healthy in any sense)
-Frank’s Red Hot Sauce

Coffee. Have plenty on hand and make sure it’s the good stuff that you don’t need to cut with cream and sugar. If you’re thinking of giving it up, wait. I tried the first day and was miserable, one thing at a time here folks.

Try not to think of the replacement things that you find as the originals. Any bbq sauce you make WILL NOT be as good as Stubb’s…it just won’t…BUT it still can be good if you just think of it as a sauce you put on your pulled pork, not a bbq sauce.

Try to limit going out or going to other people’s houses (if they aren’t doing the diet as well) for the first week. Watching Alma and Harriet eat corn on the cob, eat chips and salsa, and have dessert was tough, I can’t lie.

That’s all I can think of for now…I think I’ve already lost about three pounds of brain matter on this diet. 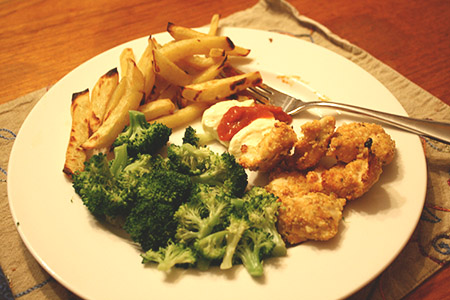 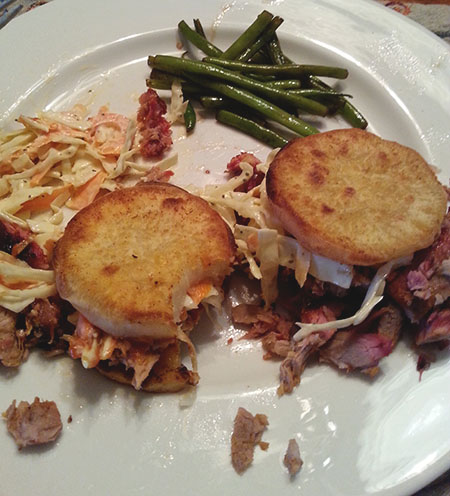 These are a couple of our Whole30 meals… see, not too shabby!  Chicken nuggets with almond crust (way better than traditional!), sweet potato fries, broccoli and homemade ketchup and mayo.  Smoked pulled pork, sweet potato slider ‘buns,’ green beans, coleslaw.  Also, I don’t think I’ll ever figure out how to photograph food.